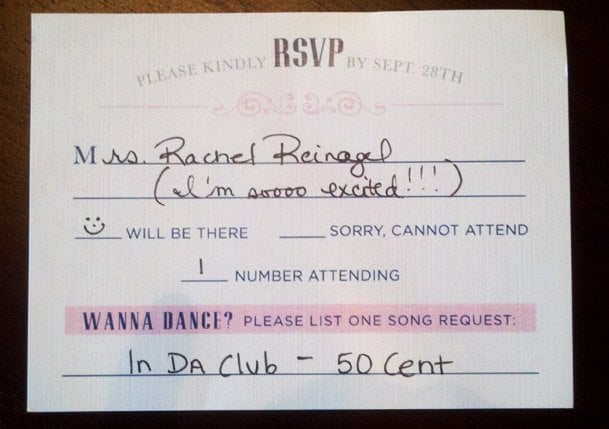 We often get asked by brides what they can do in lieu of hiring a DJ or band for their wedding. While we’re big fans of having professional musicians help you create the perfect wedding dance party, if you’re on a very tight budget and/or are having a less formal wedding, putting together an epic playlist yourself (or with the help of friends) is definitely a great option. One Reddit user recently posed this question to the wedding community and we love the helpful responses they got. From Spotify to Pandora and other music services, here’s how couples have pulled off their wedding music without a band or DJ.

Looking for a great wedding playlist? Check out our list of 20 Unique Wedding Songs That Aren’t Played to Death.

Question: I can’t find a DJ for our wedding. We are getting married near Missoula Montana. I have tried searching DJs and people that run karaoke stands and I can’t find anyone within our budget. Has anyone used an app and had success with it or was it just a mess? Has anyone used something like Spotify?–zmermaid291

My husband and I used Spotify and it was amazing. I am so glad we didn’t spend money on a DJ because it was 100% not required for our wedding. We spent weeks and weeks crafting the perfect playlist to suit our guests whose ages ranged from 15-75. We were careful to pick songs from each genre/time period that were well known that the majority of people would know. For the reception we started with current hits that nearly everyone would have known or at least been able to enjoy – fun, upbeat stuff like Bruno Mars, Macklemore and Katy Perry to get people up and dancing straight away. We then transitioned (spent ages figuring out the perfect “transition songs”) into 70’s – 80’s music like Abba, Bee Gees etc and a Queen song was the gateway to our Rock songs Had some ACDC, Def Leppard etc then we went into 90’s via Backstreet Boys. Played several super cringey 90’s hits which everyone lost there minds to, was so much fun. We then had some hip hop/rnb which we are super into and by this time of night it was late and a lot of the older people had left. Right in the last hour of the evening we just had random songs from different genres and some songs like Rage against the Machine that you defs wouldn’t want to play unless everyone had had a few drinks in them lol!!-LordHoneyBadger

We used an app called Jukestar for our wedding. It can pull a playlist from Spotify and then streams it throughout the party (requires Spotify premium). The thing that makes it different from just using Spotify is that it sets up a web page that you can share with your guests that let’s them suggest music and upvote/down vote songs so they’ll play next. As host, you can also veto any songs or take control and make a song play next. All in all it was OK for our wedding. I think for a bigger wedding it could be really cool.-canineatheart

We just did a playlist. Last wedding we went to just did a playlist. Wedding before that had a huge list of songs on a laptop and asked my introverted husband last minute to man the laptop- he did great!
I think you can totally skip the DJ but rent the sound equipment and test it well beforehand.-blushingpervert

We created a Pandora Radio station for it. We started with an artist/genre we wanted, and listened to it for a few weeks to thumbs up and down to our taste. By the wedding, it played lots of music to fit our event. Worked out well, and no one had to “handle” things for us!-freckled_giraffe

Wedding DJ here. Unless your guests are the dancing type, there’s nothing wrong with that. You’ll just need to remember that you’ll need to stop the playlist to switch the thecfirst dance, bouquet toss song, etc.
If you do not have an on-site/day-of wedding coordinator, get a DJ. The DJ (if they’re a good one) will keep the night on track and make sure it moves along smoothly.
But like I said, if your wedding is gonna be laid-back with little worry about the formalities, go for it. But if you want to have things done at a specific time, get a DJ or coordinator. Honestly, it’s better to go with Spotify (GET PREMIUM FOR NO ADs) and some speakers instead of choosing a cheap DJ that you aren’t excited about. Happy planning!-hr342509

I’m not married yet, but this is what we’re planning. It’s pretty common these days I think. We’re using spotify, having different playlists for ceremony music, dinner music, and party music. We’re still pretty far out (May 2018) but I think we may also have a friend MC a little bit to announce first dance, speeches, stuff like that. Our venue has a microphone/PA system, otherwise we’d get one from a local rental company.-TheDoctors_Companion

We made playlists in itunes for times we just wanted to have music running: before the ceremony, reception dinner music, and reception dance music. Then we had all the special songs in our ceremony and the special dances on google drive, all titled for when they were supposed to be played (for example: bride/groom exit, father/daughter dance, etc.). We had a friend sit in the audience during our ceremony with his laptop and run the music. It was wirelessly connected to the sound system in the chapel. He also cued up the music at the appropriate times during the reception, but since we had done all the work and organization of the music ahead of time all he had to do was click play.-TacitAmphigory

I haven’t been to a wedding, but I have used Spotify for other events. It does work great, however I will give one con: anyone can go up to the laptop or phone and search something, completely ruining the music flow. What I mean by that is that it then will stop the music, or play only Michael Jackson until someone manually changes it back to the correct playlist. I’ve had people constantly changing the music, even after being told to leave it alone. Even after being told to come to me for a specific song so that I can add it to our playlist so as not to stop the music from playing. It’s very frustrating. It does work great, there’s pretty much anything you want on something like Spotify, so if someone does have a request that’s not on the playlist it’s easy enough to find it and add it. But it opens itself up to people who don’t know how to use the app fooling with it and messing things up.-superherocostume

Screensaver with password protection is mandatory when you have a device in party playlist mode.-schwoooo