Who wants to look back on their wedding day and dwell on the what-ifs or the things they regret? Nobody. But a lot of brides and grooms end up doing just that.

Luckily, those who haven’t tied the knot yet can learn from some of the most common mistakes. A group of Redditors recently sounded off on theirs in the Ask Reddit thread, “What’s the one thing you regret doing for your wedding day?” Here’s a few of the things mentioned. 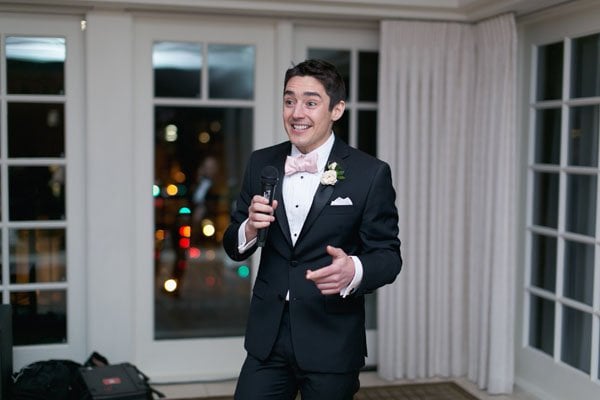 Speaking from the heart is harder than it sounds. That’s why spideyismywingman‘s biggest regret is not preparing a speech. “I thought I’d just go up, thank everyone for coming and sit back down,” they said. “Short and sweet, get it out the way. That’s exactly what I did, without mentioning my parents or my wife.”

Skipping the most important meal of the day

“Not having a good breakfast,” wrote Downvotesdarksouls. “We got married early in the day on a beach and all I could think about was how much I wanted a breakfast sandwich with eggs, cheese, and bacon on a toasted english muffin with just a touch of hot sauce!”

Registering for things ~just because~

Don’t go overboard on your wedding registry, and instead stick to the things you really need and want. Supertinypenguin initially included fine china in theirs. “I didn’t want it. Knew we would never use it. Received every thing. Never have used it in 25 years,” they said.

Accepting financial help from others

“Letting other people help pay,” ElbisCochuelo said. “As soon as that happens they take over the wedding. Guest list, decor, cake, everything.”

After the Reddit user’s comment received numerous responses and follow-up questions, they provided specific examples — like an uncle offering to pay for the couple’s honeymoon airfare, only for their 18 day trip to turn into 12 days because he bought “the cheapest tickets.”

“Paper invitations and RSVPs,” are shirleysparrow‘s biggest regret. “The amount of stress I put myself through trying to get paper mailed back to me in an era when no one uses mail anymore was so unnecessary. At one point we’d gotten very few RSVPs back and I had a total crying meltdown about how no one was going to come. Of course they were going to come, it’s just no one uses mail anymore.”

Instead, they recommend having guests RSVP on a wedding site you create. “Save yourself the headache and the money. It’s my biggest wedding regret,” they wrote.

Springing for a nice room post-wedding

A number of Redditors said the day is so exhausting, it’s not worth staying in a romantic suite or even planning to have sex. “Don’t get me wrong, my wedding day was possibly the best day of my entire life, but it would have been just the teensiest bit better if we’d gotten some charming bed and breakfast and not forced ourselves to have tired, tired sex at like 1 in the morning,” Beyonce_Fanatic wrote after mentioning that they rented an extravagant room “Turns out fancy ass hotel rooms are basically just like a clean version of non fancy ass hotel rooms, not that my poor ass would have known that before hand.”

(Literally) rushing down the aisle

“I wish I had walked slower down the aisle to my (now) husband,” Dayoldpancakes wrote. “My dad and I both naturally take long strides when we walk, so what was supposed to be a 1-2 minute-long walk of suspense turned into a brisk 20-30-second stroll.”

Not hiring a babysitter

Barksnapquack wished they would’ve paid for an onsite babysitter. “We had so many young kids at our wedding,” they said. “It was kid friendly but if we had two babysitters watching the kids it would have been more fun for the parents.”

Inviting or not inviting certain people

Though it may not seem like it, you and your S.O. don’t have to invite anyone you don’t want to. It’s your day. If for any reason you decide to do so, you might end up regretting it. “They just cost you money, you don’t interact with them at all, and they usually don’t bring a nice gift to make up for it,” Arctic_Walrus said.

On the other hand, you might regret not inviting a few people. “There were a couple people that we decided to not invite. More accurately, we needed to cut a few after booking the hall and realizing how many we could fit in the room,” UniqueConstraint wrote. “I didn’t realize how hurt those few people would be. They brought it up years later. I still feel bad about it. My wife’s uncle and his wife are horrible people and they brought people that weren’t even invited and basically forced them into their already full table. It was awkward. I regret inviting them and not inviting the hurt friends that I mentioned above.”

Not practicing hair or makeup

Test runs with makeup artists or hair stylists often cost money, but they’re worth it. Just ask wind_stars_fireflies, whose biggest regret is not doing a hair trial. “I wound up with some weird Game of Thrones braids inspired mullet thing, and the curls fell out as soon as I left the hotel because it was super humid. I would have opted for something different,” they said.

On a similar note…

If you don’t like earrings, don’t wear earrings. If you prefer flats over heels, opt for flats. Don’t do anything that’s not “you.” SuzQP wrote, “This will sound petty, but I regret wearing my hair up. It felt so unlike me and the sticky layers of hairspray wouldn’t brush out when I got undressed that night.”

The most mentioned regrets all had to do with vendors — photographers in particular. When choosing the person charged with documenting your big day, get details, ask questions, and make sure they understand what you want. The same goes for florists, planners, and other vendors. Ganglebot learned this the hard way with the coordinator they hired. “Dude got flustered and started second guessing everything right before the ceremony,” they wrote. “Like he somehow forgot how a wedding works at the last moment, when all of our guest where there. ‘OMG what song do you want to play while she walks down the aisle!’ I dunno dude, the one everyone walks down the aisle to. The wedding song. The one we already told you to play. I ended up taking charge and sorting everything out. Really wish I could have just gone with the flow on my big day.”

This goes for your friends who are participating in the wedding, too! DonJulioTO hired a friend as the DJ, and despite giving him “simple cues and songs,” he “completely f—ked up.”