The term “bridezilla” doesn’t even begin to describe the woman — known only as “Susan” — who went viral after a Twitter user shared the Canadian’s Facebook rant about her now-canceled wedding.

Susan’s dramatic story is so good it could honestly be turned into a movie. But it’s almost too good. Fact-check website Snopes tried to verify the Facebook post, Susan’s story, and even Susan’s existence, but it was unable to.

Fact or fiction, the whole thing is hilarious and worth a read.

According to the tweeter who’s since deleted her account, she found Susan’s post in a “wedding shaming” Facebook group (which is exactly what it sounds like). Susan’s supposed story began as a sweet recollection of how she met her former fiancé at 18, only for their relationship to progress with the birth of a baby and an engagement. Susan explained the sacrifices the two have made over the years in order to have the wedding of their dreams, which they saved up nearly $15,000 for.

However, the couple’s dream wedding “amounted to $60,000,” — thanks in part to advice from a psychic.

“All we asked was for a little help from our friends and family to make it happen,” Susan wrote, before casually mentioning that all she and her partner had asked for was $1,500 from each guest.

Apparently, some people didn’t even have a problem with it. “My maid of honor pledged $5,000 along with her planning services,” Susan continued. “We tearfully thanked and accepted. My ex’s family offered to contribute $3,000. So our request for $1,500 for all other guests was not f***ing out of the ordinary. Like, we made it clear. If you couldn’t contribute, you weren’t invited to our exclusive wedding. It’s a once and a lifetime party.”

Not everyone saw it that way, though. After the couple sent out their invitations — which included the money requests — a total of eight people RSVP’d.

“We were f***ing livid,” Susan wrote. “How was this supposed to happen without a little help from our friends. To make matters worse, my ex’s family took back their offer. Suddenly, more people backed out, INCLUDING THE C*NT MAID OF HONOR. MY BEST FRIEND SINCE CHILDHOOD. MY SECOND FAMILY. I was so shocked and tearful.”

According to Susan, this all happened a mere month before the wedding. She and her fiancé didn’t want to pay any cancelation fees, so they resent their invitations. “I mean seriously people, what is $1,000? What is $1,500?” Susan continued. “Clearly, not a lot. It would be quite manageable and within budget. I’ve heard of people asking for worse.”

At one point, the couple even set up a Go-Fund-Me.

But for Susan, the final straw came when her fiancé suggested tying the knot in Las Vegas. Naturally, she laughed in his face. “Am I supposed to get married in the heart of shady gamblers, alcoholics and the get rich fast fallacy?” Susan wrote, throwing out a number of ridiculous insults at anyone who dare wed in Vegas.

Afterward, Susan’s MOH refused to feel bad for her — and so did her fiancé, apparently. “I overheard him talking in the basement when he called me a stuck up b****. Anyway I am exhausted. I am bone tired. My heart is not the same. It’s stone cold,” Susan wrote.

The wedding was clearly off.

As for Susan’s future, she said she’s headed to South America to “explore her soul and rid herself of toxic energy brought on by her friends and family.”

She ended the post on a good note, of course. “Friendly reminder to you c****. Don’t think you own me. I am cutting all of you snakes off. I am living my life alone now. I only let in those I believe have good intentions. Xoxo.”

The dramatic story struck a chord with the internet, whose reactions can be summed up by one of the few visible comments on Susan’s alleged post, “I have no words, you’re out of your mind, Susan.”

this is some lower stakes 13 reasons why shit. https://t.co/MMJWmhMd5B 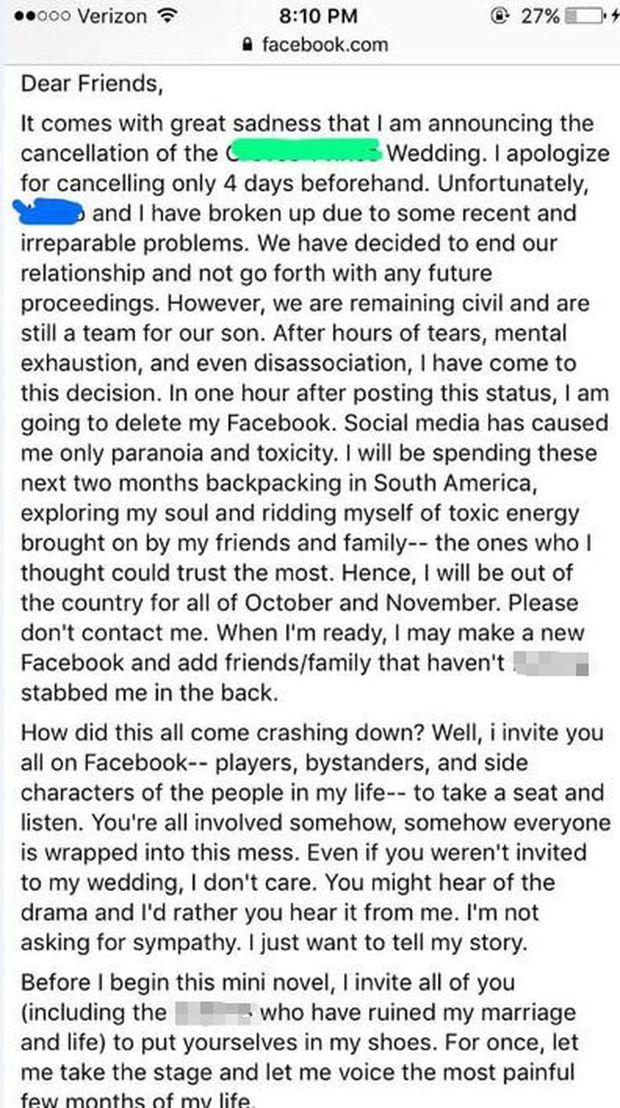 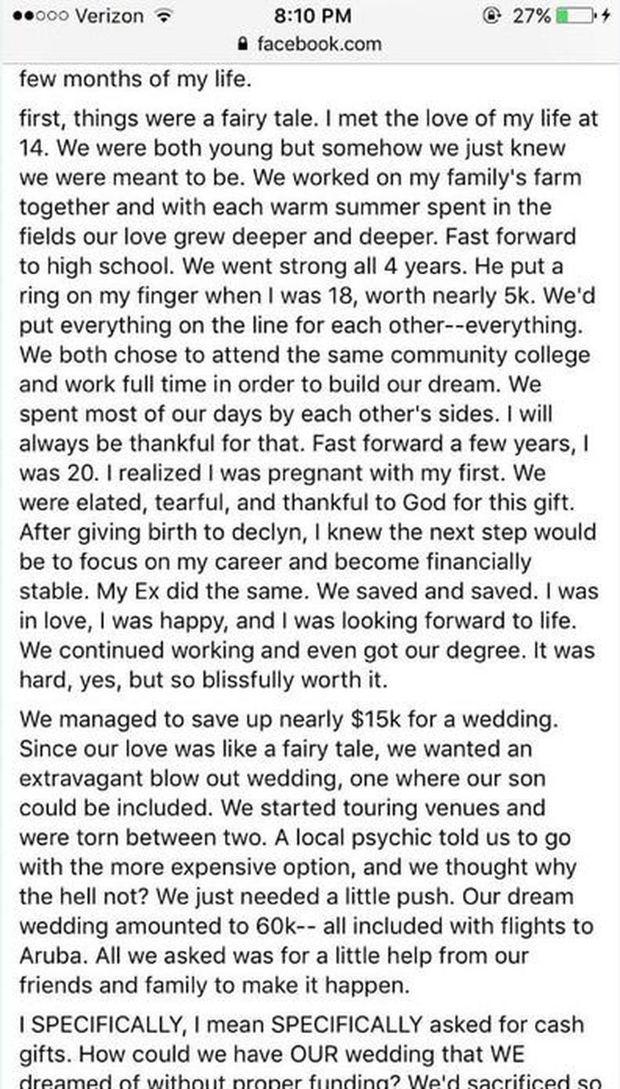 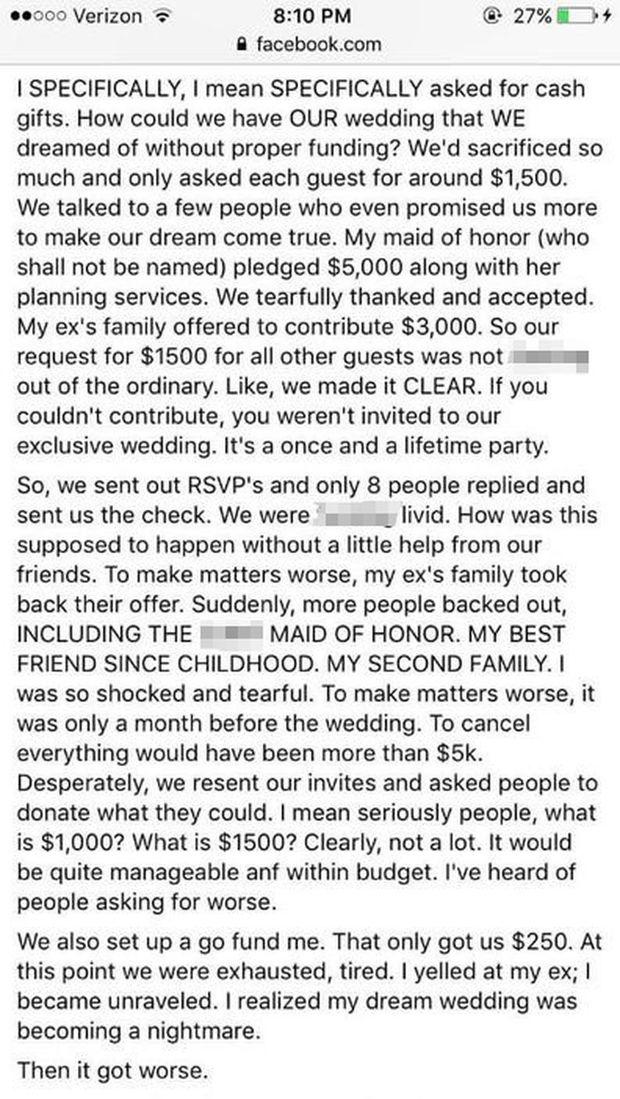 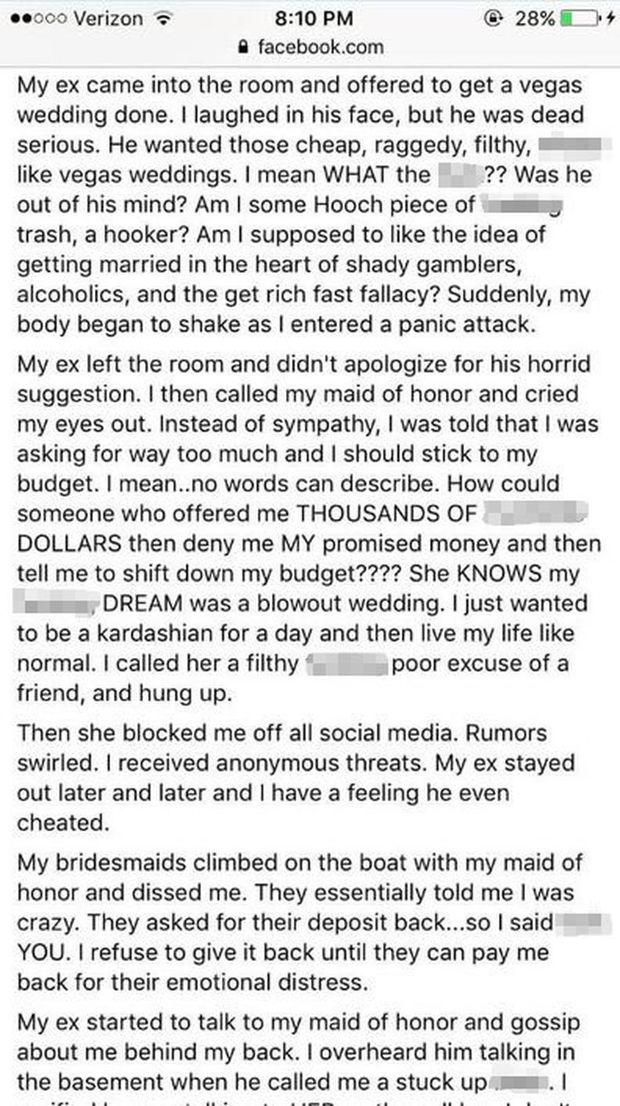 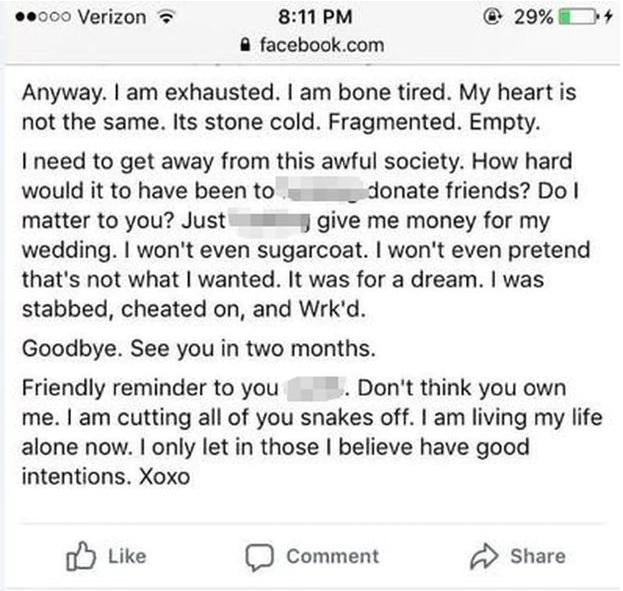