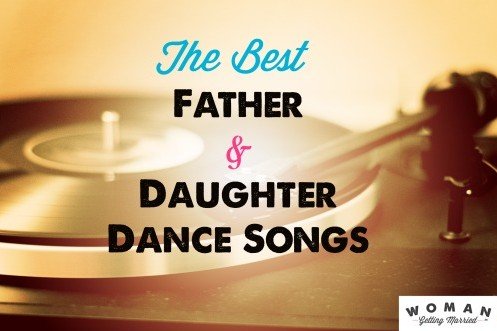 Father/daughter wedding songs can be…tricky. You want a wedding song that is sweet and sentimental, but on the other hand you don’t want something that’s too romantic (and chances are most of your favorite slow/love songs fall into the latter category) or that talks about sex. For example, I love Van Morrison’s “Brown Eyed Girl,” but these lyrics ruin it for a father/daughter dance:

Um…no thanks. But don’t worry, there are a lot of great choices out there for father daughter wedding songs that (hopefully) won’t make you cringe when you hear them, let alone dance to them.

I’ve compiled a few of my favorite potential father/daughter wedding songs, below. A few of them are classics you’ve undoubtedly seen on other lists (like Louis Armstrong and Fleetwood Mac), but some of them are a bit more under the radar. For example, a lot of brides use Sheryl Crow’s cover of “Sweet Child O’ Mine,” but I’m actually a fan of Luna’s more alternative cover. Granted your dad has to feel comfortable dancing to any song you pick out, so be sure to send him your potential song choices to see what he thinks. He might have a song he loves that could be perfect for your dance (and hey, it’s probably retro enough to be cool).

As a side note, I should point out that there really aren’t any songs on here that, say, have been released in the past decade. And no, I’m not 80-years-old! Lol. I just love the way the classics sound, and I think it’s fun to go old school for a lot of wedding songs. But that’s just my style! If you have a recent (or old) song that you think should be added to this list, let us know in the comments section, below.

Still looking for musical inspiration? Check out our picks for 20 Unique Wedding Songs That Aren’t Played to Death.

As I mentioned above, this is one of my favorite covers of this song. It’s sweet and indie and is definitely more danceable than the original (can we say awkward guitar solo dance with dad?). Side Note: The Vitamin String Quartet also does a great version of it that would be fun to use as a processional.

I love, love, love this song. But I’m pretty much obsessed with anything Nina Simone sings. Even though I walked down the aisle to “Feeling Good,” this *might* be my favorite Nina song. The song, which was written by George Harrison in 1969 for The Beatles’ Abbey Road, would also work for a first dance wedding song for your and your hubs, or for a mother/son wedding song.

3. Nothing Can Change This Love by Sam Cooke

This is one of those songs that you can’t go wrong with. It has sweet lyrics, it’s slow enough to sway back and forth to, and it’s not totally overplayed as a wedding song.

4. What a Wonderful World by Louis Armstrong

Yes. This is a classic and is on pretty much everybody’s favorite wedding songs list. But it’s on there for good reason!

5. That’s How Strong My Love Is by Otis Redding

This song could be interpreted as romantic, but I think the lyrics make it totally appropriate as a father/daughter wedding song.

Another classic that is on pretty much every wedding song list, but it’s too pretty not to include. It’s probably the saddest song on this list, but it’s still amazing and definitely worth considering.

7. Fly Me to the Moon by Frank Sinatra

“The Way You Look Tonight” is definitely more popular as a father/daughter wedding song than this one, but there’s something about this song that I just love. This was the song that I danced to with my dad, and was actually one of the main reasons I wanted to have a big wedding. For some reason this song stuck with me ever since I heard it when I was little, and I knew I wanted to dance with my dad to it. It’s not a classic father/daughter wedding song in that it has a few somewhat romantic lyrics, but if a song means something to you, that’s all that matters.

8. You Were Always On My Mind by Willie Nelson

I don’t think there are enough wedding song lists out there that deal with potentially complicated situations. Maybe your relationship with your parent(s) hasn’t always been smooth sailing, but they are now in your life and you both want to acknowledge that. This song always makes me teary, and could be a good choice if one or both of you want to express that even though you might not have always been there for each in the past, you are now.

9. Shout by The Isley Brothers

OK, enough with the tearjerkers! This is the song for those of you who want to do a fun choreographed dance with dad, and perhaps even have the DJ ask your guests to join in. I also seriously considered Sam and Dave’s “Hold On, I’m Comin’,” but I felt like it could be a little weird to dance to with dad, if you know what I mean (even though it’s one of my favorite songs ever!). “Shout” has pretty mild lyrics and will definitely get the crowd laughing.