Where have I been?!

Well, it has been holiday travel craziness over here. First, the hubs and I went to North Carolina to visit family for Christmas, where we stayed for a week. As soon as we got back we decided to take advantage of another week off of work so we hopped in the car and took a drive north to San Francisco. We had a super fun 4 nights and 5 days staying in a great hotel, eating lots of yummy food and having some great cocktails, to boot. It was a nice way to decompress from the holidays and get some quality R&R time with each other.

I’ve always been a fan of San Francisco in theory, but as soon as I’ve spent any amount of time there I’m always left thinking it’s not as great as New York City, where we lived for so long. However, seeing as we’ve now lived in two other “cities” (Nashville and Los Angeles) since we  left the Big Apple, I’ve come to appreciate those differences even more. I think it might also be the fact that I don’t love Los Angeles, and being in any proper city (which San Fran certainly is) is a major treat for me and makes me realize how much I miss living in one. But that’s a whole other post.

The last time we went to San Francisco was two years ago, and while we spent a couple nights there we stayed the majority of the time in Napa Valley, which has to be one of my favorite places in the U.S. If you’re looking for a West Coast honeymoon destination, I highly recommend Napa Valley. Depending on the amount of time you have off for your honeymoon, I think time spent in both San Francisco and Napa Valley would be a great combo (3 or 4 nights in each would be perfect).

Below are a few highlights from our New Year’s Eve San Francisco trip this past week. While we enjoyed some more than others, overall we were pretty happy with every spot we visited. However, I’ve only included the spots I would definitely go back to and encourage others to do the same!

St. Regis: I’m a hotel junky, and the older I get the pickier I seem to get (surprise, surprise). Because I seem to like plush hotels but don’t always want to pay their prices, I signed up for the Amex Starwood Preferred Guest credit card in the hopes of getting discounted stays. It’s consistently ranked as one of the best perk cards you can get, and I can see why. We were able to get two of our nights at the St. Regis paid for with points (along with a free upgrade), which made the other two nights we had to pay for the 5-star hotel even out to a somewhat acceptable range (along with a AAA discount). If you’re a year or so out from going on a honeymoon, I highly recommend getting a points-based credit card, be it a Marriott or Starwood card, or an American Airlines one. We’ve been able to upgrade to first class multiple times on anniversary trips and other vacations purely because of points earned on our American Airlines credit card, which is something I wouldn’t pay for otherwise. Considering you can get 25-30,000 points just for signing up (which is a free ticket or multiple hotel nights in some cases), it’s definitely worth it!

Now that I’m done with my credit card spiel (I swear they’re not a sponsor!), I can say I would definitely stay at the St. Regis again. It’s in a great walking location, the service is great, the beds are super comfy, and the rooms have separate soaking tubs…which is seriously one of the main reasons I like staying in hotels (and not that many have them!). We stayed 4 nights and I probably took 6 baths. I’m that addicted. It’s definitely a romantic hotel that’s worth the splurge, especially for a honeymoon.

Wayfare Tavern: This is Tyler Florence’s flagship restaurant, and I have to say we loved it. We loved it so much we actually ate there twice (once on New Year’s Eve). While everything we ate there was great, it was the Beef Tartare that really stood out. That and the popovers, which were admittedly one of the most delicious things I have EVER eaten. Seriously. Delicious. They were booked both nights, but we walked in and were seated at the chef’s table both times, which I actually prefer to a regular table. It was great watching the chefs work! Side Note: Since we’ve gotten home I’ve attempted to make the Wayfare Tavern popovers TWICE with no luck. Making a perfect Wayfare Tavern popover is now one of my New Year’s resolutions.

Bar Tartine: If we lived in San Francisco, I would probably go here every weekend for lunch. I love everything about the ambiance and the food here. I haven’t been for dinner, but I imagine it’s just as good. And the bread? OMG the bread. What is it about this city and the bread?! It’s enough to drive someone carb-crazy. For lunch we had a trio of SMØRREBRØD (open-face rye sandwiches with yummy toppings such as smoked trout or kale with yogurt), and really great cappuccinos with Four Barrell coffee. I want to go back!!

Pizzeria Delfina: Farm-to-table pizza that is some of the best I’ve ever had. This is a must for lunch or dinner.

Oysters: If you’re in San Fran you have to get oysters. The family run Swan Oyster Depot and Hog Island Oyster Company are both delicious. Be prepared to wait in line, however. In fact, be prepared to wait in line at most places in San Fran, including Pizzeria Delfina (though that line moves MUCH faster). Word to the wise: You can easily wait up to two hours for a spot in the tiny Swan Oyster Depot (it only has 20 or so stools). If you’ve got 10-20 people in front of you at Swan, you might want to come back another day because you will be in line a LONG time. Trust me.

Bi-Rite: My husband is obsessed with their cookbook, so a visit to this small market was half the reason we took a trip back to San Fran. We went here on New Year’s Eve day, and it was pretty packed. They have lots of yummy speciality items, including wine and heritage meats that aren’t as easy to find elsewhere. We didn’t try one, but the sandwiches in the deli looked amazing. It could be fun to grab two sandwiches to go and eat them in the nearby park. We did this with ice cream from the neighboring Bi-Rite Creamery and it was delicious.

NOTE: Other restaurants we ate at on this trip included Commonwealth and Gitane. While they were both good we wouldn’t necessarily go back. Next on our list of places we want to try are Perbacco and Tosca Cafe.

Big 4: This is a restaurant but we just went here for drinks on New Year’s Eve, and is definitely the kind of place to go out of your way for. It’s old school in the best sense, and on a chilly night is cozy and perfect. I hear it might be closing for renovations under new ownership, however, so check to make sure it’s still open.

Comstock Saloon: A fun vibe with good cocktails and music.

Buena Vista: You have to stop in here for an Irish Coffee, no matter how early in the day it is.

Pier 39: There’s only one reason to visit the Fisherman’s Wharf, and that’s to see the massive number of sea lions at Pier 39. They’ve been hanging out on the docks for more than 20 years, and while it smells like it they are definitely a site to see. Watch the sea lions and then walk down to Buena Vista (above) to warm up with an Irish Coffee. 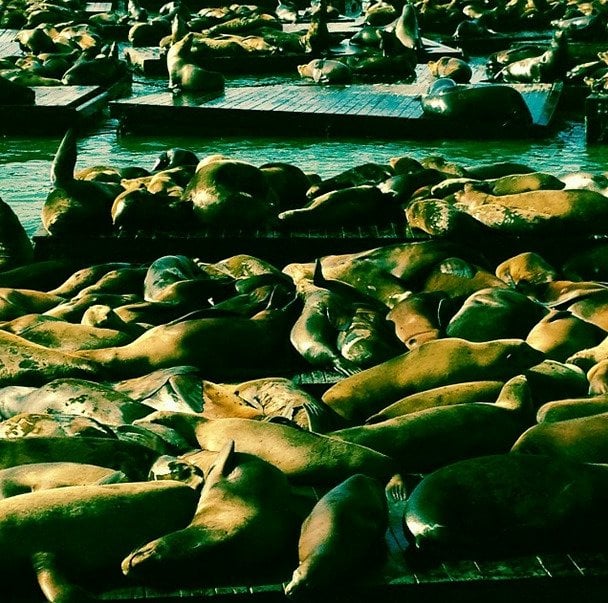 Ferry Building: If you go to eat oysters at the Hog Island Oyster Co, (which is located in the building), take 30 minutes to stroll around the building and visit places like Rancho Gordo or Cowgirl Creamery in the marketplace.

Double-Decker Bus Tour: This is one of the best ways to see any city, and even though they’re a bit cheesy we still love getting tickets and just riding around.

Trolley: We waited in line an hour to ride the trolley 15 minutes, but it was kind of worth it. Get a spot on the side if you can!

The Presidio: If you have a car I highly suggest taking an hour (or two) and driving 15-20 minutes to The Presidio, a park that overlooks the Golden Gate bridge. That bridge is seriously breathtaking, and seeing it from that perspective is really amazing (it’s where I took the photo of the bridge, above). If you have a car drive a little further to Sausalito, which is a cute little town worth staying in to have lunch or a coffee overlooking the water. We didn’t make it to Muir Woods this time around, but it’s definitely on our list for next time!