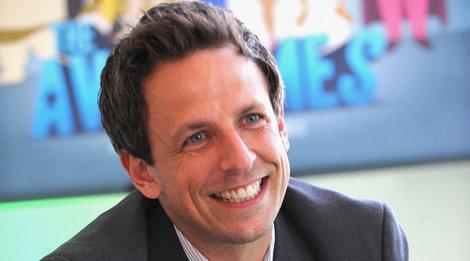 Saturday Night Live alum Seth Meyers, who got engaged earlier this summer to longtime girlfriend Alexi Ashe, recently shared the funny details of how he popped the question with Jimmy Fallon.

“I tied [the ring] in a bow around our dog’s collar,” said Meyers, 39, who will take over for Fallon in February when he heads over to The Tonight Show. He added that Ashe, a human right lawyer, was returning home later than expected, which meant he was even more nervous than usual.

“I just had to sit there looking at the dog. I was like, ‘The dog’s going to eat the ring!’ ” said Meyers. Thankfully, the dog in question did NOT eat the ring, and Ashe accepted his cute proposal.

Now that the pair are in the midst of planning the wedding, Meyers jokes to Fallon that his fiancee’s “excellent taste” means his opinion is pretty much moot.

“Every now and again, she’ll throw me a courtesy question,” Meyers says. “Do you think the invitations should have seashells or lighthouses? I’ll be like, ‘Seashells?’ And she’ll be like ‘…Not lighthouses?’ ”

“I’m like, ‘Don’t ask me if there’s a right answer!’ She’ll have to make it easier for me. Like, ‘You either get to have lighthouses or rattlesnakes,’ ” Meyers joked.

But seriously, ladies. Isn’t that kind of the truth? I definitely tried to involve the hubs in as much planning as possible, with everything from venue approval to invitation design. He was also in charge of certain things I knew he would enjoy, such as the music playlist and, err, that might have been it. But at the end of the day he trusted my opinion on the wedding venue (he never saw it in person, since we lived out of state and I would just send him photos of it), and on pretty much every other aspect of the wedding.

But, just to clarify that this is actually what happened, the hubs is on the couch next to me as I write this, and I just posed this question to him: “Did you want to be more involved in the wedding planning process, or do you feel like you did as much as you wanted to?” His answer?

“To be honest, things like what the stemware looked like or the table linens didn’t matter to me. But I would weigh in from time to time so you felt like I was involved. Sometimes I would even put up more of a fight for something trivial, like placecard settings, just to keep you on your toes.”

LOL. Well, now that I know how the hubs really felt, I want to hear from you! Is your future husband involved in the wedding planning process, or does he let you take the charge? Are you surprised at how much he wants to be involved? And be honest…how much do you REALLY want him to be when it comes down to it? Would you be mad if he vetoed an invitation design you loved? Tell us what’s going on in the comments section below.