Sealed with a kiss #Justmarried #RoyalWedding

We woke up crazy early on the West Coast (2:30 a.m.!) to start watching the royal wedding coverage, and we are so happy we did! This had to be one of the most beautiful weddings we’ve seen. Steeped in tradition yet so thoroughly modern, Meghan Markle and Prince Harry’s wedding was such a moving, incredible event. We compiled a few of our favorite moments from their big day, below.

Meghan Markle’s wedding dress was designed by British designer Clare Waight Keller for Givenchy, and her tiara was the Queen Mary bandeau tiara. But the real star of the show might have been the cathedral-length veil which measured around 16 feet!

Made from silk tulle, the veil featured hand-embroidered flowers from each of the 53 counties in the Commonwealth. Meghan also had Wintersweet–which grows in the grounds of Kensington Palace in front of Nottingham Cottage–and the State flower of California (California Poppy) added, too. Apparently the creators of the veil spent hours sewing the flowers on, washing their hands “every 30 minutes to ensure the piece was immaculate,” according to People.

Meghan Markle’s wedding makeup was done by friend/celebrity makeup artist Daniel Martin and featured dark liner with lots of lashes and a neutral lip. Her wedding hairstyle, a chignon with a center part, was done by Serge Normant.

Meghan’s dress was deliberately simple so she could show off her face. It’s also a modern statement, like Carolyn Bessette Kennedy. The American Bride is in town! #royalwedding #meghanmarkle #givenchy #clairewaightkeller

Prince Harry picked flowers from the couple’s personal garden at their home at Kensington Palace. He gave them to florist Phillipa Craddock to include in Meghan Markle’s bouquet. They also made sure to include Forget-Me-Nots, Prince Harry’s late mother Diana’s favorite flowers. The bouquet also included sprigs of myrtle, a royal tradition. 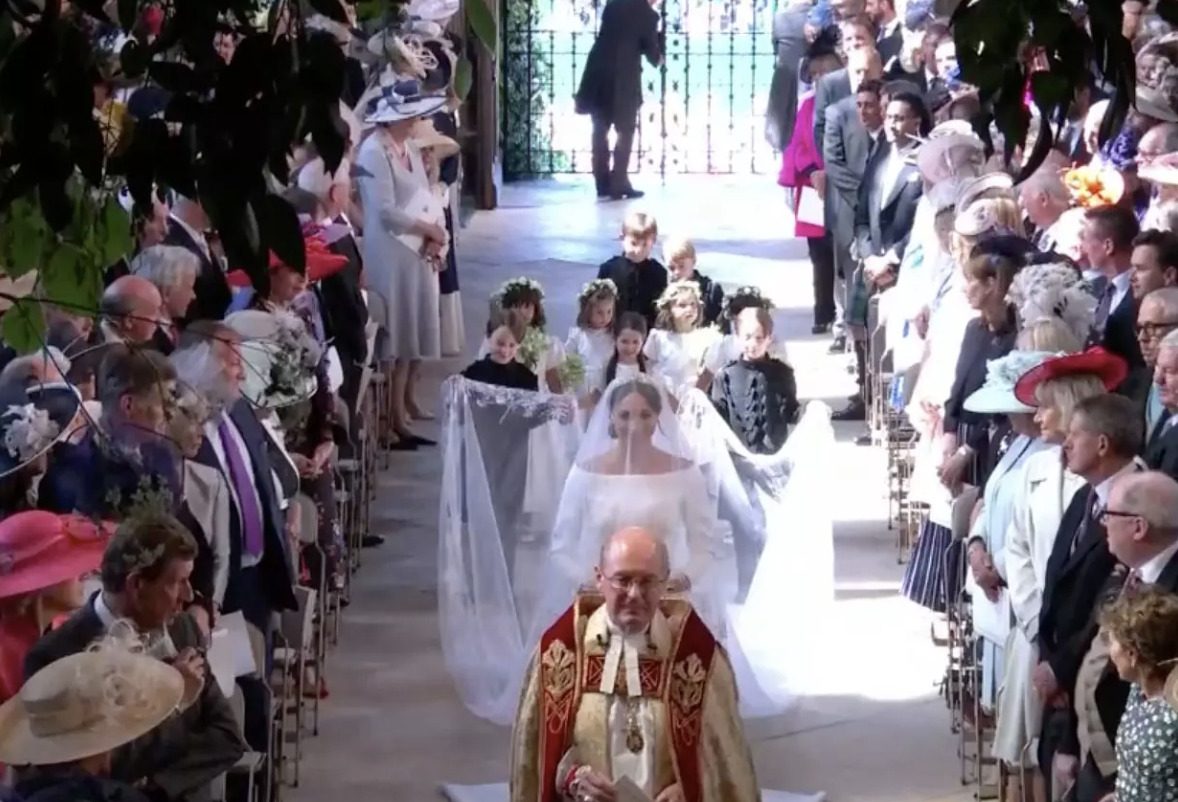 Meghan Markle did not have a Maid of Honor, but she did have an adorable gaggle of young bridesmaids and page boys that helped carry her veil down the aisle. The twins that got all the attention were Brian and John Mulroney, the 7-year-old sons of Meghan’s best friend, Jessica Mulroney. Prince Charles walked her down the aisle, which was so heartwarming.

This was another definite highlight from the day. Meghan Markle walked down the aisle to George Frederick Handel’s “Eternal Source of Life Divine,” sung by soprano Elin Manahan Thomas. Karen Gibson and The Kingdom Choir later sang “Stand By Me,” by Ben E. King in an amazing performance.

The couple exited the chapel to a version of “This Little Light of Mine” by Etta James.

Prince Harry lovingly looked at Meghan Markle and appeared to say, “You look amazing. I’m so lucky.” followed by “I love you. Swoon!

THE WAY PRINCE HARRY LOOKS AT MEGHAN AFTER HE SAYS “you look amazing” IM SOBBING THEY ARE SO IN LOVE #RoyalWedding pic.twitter.com/GTzlbNq1Ak

Rev. Michael Bruce Curry, who is the presiding bishop of the Episcopal Church and originally from Chicago, gave an impassioned address about Martin Luther King Jr. before turning to the bride and groom and joking “We gotta get y’all married.” 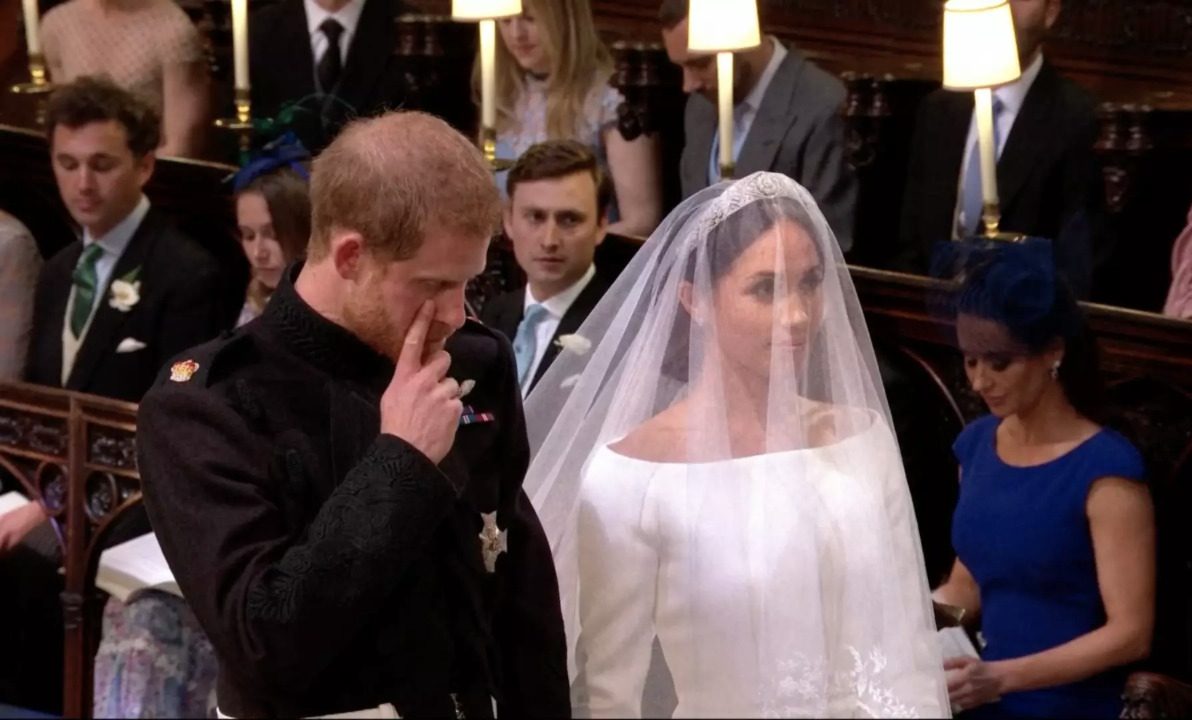 While the couple did not write their own wedding vows and went with traditional ones, they were still super romantic. Here they are, below.

“I Harry, take you, Meghan, to be my wife, to have and to hold from this day forward,” he said. “For better, for worse, for richer, for poorer, in sickness and in health, to love and to cherish, till death us do part; according to God’s holy law. In the presence of God I make this vow.”

“I Meghan, take you, Harry, to be my husband, to have and to hold from this day forward; for better, for worse, for richer, for poorer, in sickness and in health, to love and to cherish, till death us do part; according to God’s holy law. In the presence of God I make this vow.”

Like Princess Diana and Kate Middleton, Meghan also omitted the vow “to obey” her husband.

With millions of photos getting to our eyes, I believe this mom is the best of all , modest and dignified in spite of all the trash thrown from the rest of the family #AMom #royalwedding #doriaragland #meghansndharry #dignity

Perhaps the sweetest moment of the wedding was watching Meghan’s mom Doria Ragland look on as her daughter became part of the royal family! 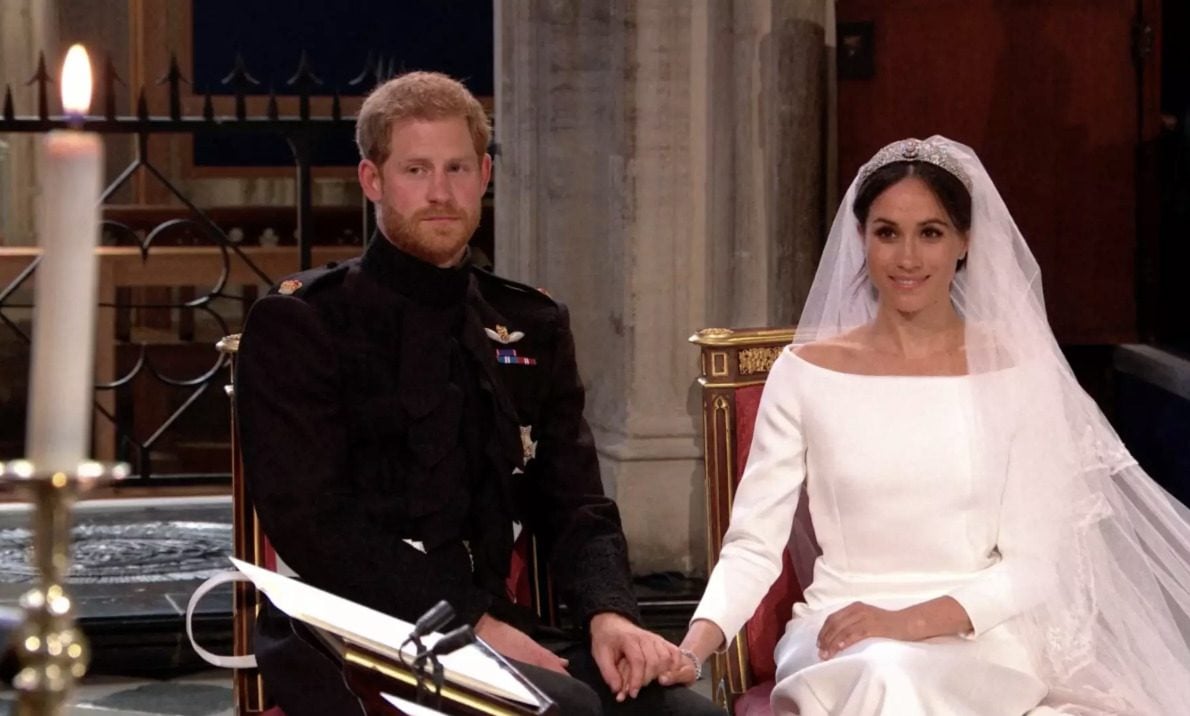 Prince Harry’s wedding band is platinum and not made from the royal’s collection of Welsh gold (which is customary), however Meghan Markle’s wedding band–a gift from the Queen–is.  Both of the royal wedding bands were made Cleave & Company, who also created Meghan’s engagement ring.

The A-listers have turned on the style for the wedding of Prince Harry and Meghan Markle. David and Victoria Beckham, Idris Elba, Oprah Winfrey and the Clooneys are amongst the guests at Windsor for the big ceremony. (Via @bbcnews) • • • #royalwedding #royalfamily #princeharry #meghanmarkle #bbcnews @davidbeckham @oprah @victoriabeckham #GeorgeClooney #AmalClooney #DavidBeckham #VictoriaBeckham

Celebrity guests included Oprah, Elton John, Serena Williams, David and Victoria Beckham, and George and Amal Clooney, who wore one of our favorite dresses of the day (next to Meghan’s, of course!).

The newlyweds, The Duke and Duchess of Sussex, set off on a carriage procession through Windsor on their wedding day. #royalwedding

The newlyweds (whose official title is now The Duke and Duchess of Sussex) left the chapel in an open-top Ascot Landau carriage which carried them on the 25-minute ride through the streets of Windsor to Windsor Castle, where they attended a luncheon thrown by the Queen.

Prince Harry and Meghan Markle appeared a short time later, dressed for their second reception at Frogmore House. Meghan Markle was radiant in a sultry Stella McCartney silk crepe halter dress. The black-tie wedding reception–thrown by Prince Charles–is a more intimate event, with only around 200 guests.

Wow! What an amazing wedding! Congrats to the happy couple!!