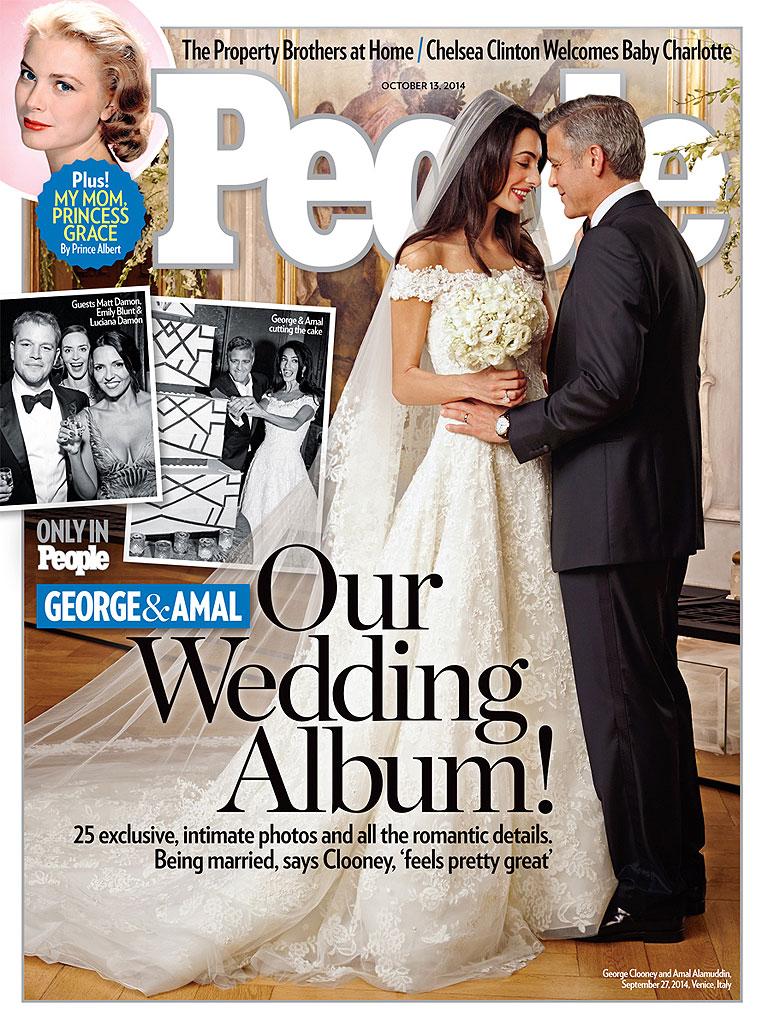 People magazine broke the news overnight that their latest issue will feature 25 exclusive images from George Clooney and Amal Alamuddin’s weekend wedding extravaganza in Venice, which on first sight looks completely drool-worthy (would you expect anything less?!). The issue also features new details about the wedding of the year, including who made speeches, who the couple wore, and what their first dance was (more on that, below).

Around 100 guests–including celebrity friends such as Matt Damon, Emily Blunt, John Krazinski, Bono, and Anna Wintour–were on hand to celebrate the couple, who chose the Aman Canal Grand Venice as the wedding venue for their September 27, 2014 nuptials.

“We met in Italy,” Clooney, who owns an estate on Lake Como, told People.”We have a home there. We knew that was where we wanted to get married.”

As for “the dress,” while most of the Internet was convinced (myself included) that Amal Alamuddin was going to wear a Sarah Burton for Alexander McQueen wedding dress, she surprised us all by choosing a gorgeous Oscar de la Renta wedding dress instead. The dress (made of French lace) featured an off-the-shoulder neckline and a full-circular train with hand-embroidered pearls and diamanté accents.

As for George Clooney, 53, People reports the groom wore a Made-to-Measure Armani wool/cashmere tuxedo that he paired with silver cufflinks that had “George” inscribed in Arabic on them, which were a gift from his bride Amal Alamuddin (who was born in Beirut, Lebanon).

Their wedding ceremony was 30 minutes long, and featured speeches from four close friends and relatives, including Amal’s mother Baria, an editor at the Arabic newspaper Al-Hayat. “I said, ‘George, we love you truly, deeply and sincerely. We enjoy your charm, your wit, intelligent conversation and generosity. You are simply perfect,'” she told People.

For their first dance song, the couple chose the song “Why Shouldn’t I?” written by Cole Porter for the musical Jubilee. While several artists have covered the song throughout the years, one of the most noteable ones is from George’s Aunt, Rosemary Clooney. While that would have been a great version for them to go with, it turns out they went an equally impressive route and instead got Nora Sagal to sing the tune. Sagal is the teenage daughter of Warner Bros. executive David Sagal, and someone who Clooney has called an “extremely” talented singer. In addition to their first dance song, Sagal started the ceremony off by singing Irving Berlin’s “Always,” which was Clooney’s parents’ first dance song.

The lyrics to “Why Shouldn’t I,” which seem especially poignant considering George Clooney’s famed former bachelor status, are below! Congrats to the way-too-gorgeous couple!!!

Why shouldn’t I take a chance when romance passes by?
Why shouldn’t I know of love?
Why wait around when each age has a sage who has sung
That upon this earth love is all that is really worth thinking of?

All debutantes say it’s good
And every star out in far Hollywood
Seems to give it a try
So why shouldn’t I?

All debutantes say it’s good
And every star out in far Hollywood
Seems to give it a try
So why shouldn’t I?